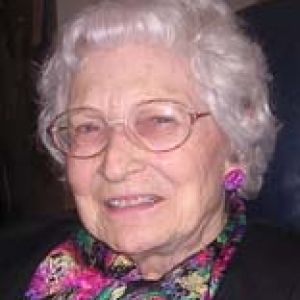 We gather here this evening to remember and celebrate the lifetime travels of Sister Rose Mary Eich’s 75 years as a Sister of Humility. She was born in Minnesota and while a youngster traveled with her family and settled in Marshalltown, Iowa. Rose Eich was born on August 26, 1918, to Frank and Mary Maitz Eich. Her father came from Germany and her mother from Yugoslavia. She and her sister Barbara and brothers Otto, George, Carl, John, and Leo grew up in Marshalltown and attended St. Mary’s School. It was there that Rose first met the Sisters of Humility who taught at St. Mary’s School. Of her siblings, Only Barbara Edsall survives as well as nieces and nephews.

After graduating from St. Mary High School, Rose entered the Congregation of the Humility of Mary, Ottumwa Iowa, in January of 1938; received the habit and her name in religion, Sister Marietta, in the summer of 1938 and pronounced first vows in the summer of 1940. Sister continued her education by earning an AA from Ottumwa Heights Junior College, Ottumwa, Iowa; a BA in education from St. Ambrose/Marycrest College in Davenport, Iowa; and an MS in library science from the University of Minnesota plus post graduate work at Notre Dame and the University of Iowa.

After Vatican II, sisters were specifically asked by the Holy Father to spread their services into the southern hemisphere. Sister saw an ad in a library periodical telling of the need for library professionals for the Peace Corps in developing countries. She followed up on the ad and before she knew it she had taken a crash course in Spanish and found herself in Bogota, Columbia, working for agencies in the state capitals of Cali and Neiva setting up libraries for the use of professionals who were learning to work with low income people. She also was able to train people there to continue with library work after the Peace Corps volunteers left. She lived with Colombian families to better understand the culture.

At an age when most people retire, Sister Rose Mary went to Biloxi, Mississippi, first as a volunteer tutor in the McCauley Center, and later as resource center coordinator and volunteer receptionist at the cathedral rectory. She loved the climate and the threat of hurricanes did not seem to bother her.

When Sister finally retired and came to Humility of Mary Center in Davenport, she became one of the chief `puzzlers` spending hours each day working on the jigsaw puzzle in the community room. I often heard her speak of her travels: Great Britain, China, Japan, Australia, and of course South America. She never seemed to tire of traveling. Her passports carry stamps from dozens of countries. In our CHM community constitutions, Search and Service, we read that sisters should observe the first and greatest commandment of loving the Lord Jesus Christ with all their strength. Because of this love, the sisters are asked to love their neighbor and to be united as members of one body. Sister seemed to be at home with all of God’s people being open to learning about them and being willing to serve wherever the Spirit led her. No one can deny that she did more than her share in building up the body of Christ.