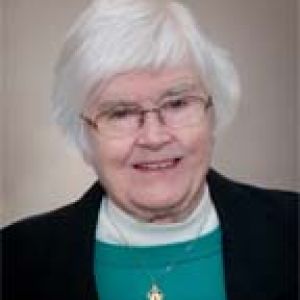 Welcome to Humility of Mary Center. We meet tonight to celebrate the life of Sister Leona Mary. My first introduction to sister was when she and a group of summer work sisters did a rousing rendition of `76 Trombones,` for the Fourth of July. She remained a person of pep and optimism for her entire life.

Leona Elizabeth Manning was born on February 4, 1922, in Granger, Iowa, one of twelve children of James and Catherine Smith Manning. Brothers James, Clement, Jack, Patrick, and Robert; as well as sisters, Agnes, Catherine, Henrietta, and Rose are deceased. She is survived by Rita Hettich of Dousman, Wisconsin, and many nieces and nephews.

After graduating from Assumption High School in Granger, she fulfilled one of her dreams; going to a boarding school when she enrolled in Ottumwa Heights Junior College. It was there that she became acquainted with the Sisters of Humility. After that graduation, she went to Marycrest College, Davenport Iowa, to finish her BA, graduating in the class of 1943. She entered the Congregation of the Humility of Mary in September of 1943, received the habit and her religious name, Sister Leona Mary, in 1944 and professed first vows in 1946.

After receiving a MS in Library Science from the University of Iowa, she ministered as high school librarian at Gehlen High School in Le Mars, Iowa, and Dowling High School, Des Moines. She then spent eighteen years as periodical librarian at Marycrest College. In 2002 she moved to Humility of Mary Center. Sister kept busy with various projects, particularly the Living Lands and Water clean-up project and was always the avid recycler.
Sister’s lively personality was appreciated by all who know her. In an autobiographical paper written for a college class, she owns up to a fair amount of mischief as a young child in school and decides that is just part of her Irish heritage. Whether it was entertaining the sisters at the Airbase in a spirited version of `76 Trombones,` playing the role of one of our early French sisters in the first blue habit, or enjoying any number of holiday gatherings, she was always an exuberant party participant.

As changes came in the Church in the 1950s, Sister was able to spend more time with family members on holidays, weddings, baptisms, and birthdays. The energetic sister with the jaunty step and the twinkling blue eyes will certainly be missed by her family, her CHM sisters and associates, and friends. I am certain that she greeted St. Peter as she greeted many of us each day – `How do.`