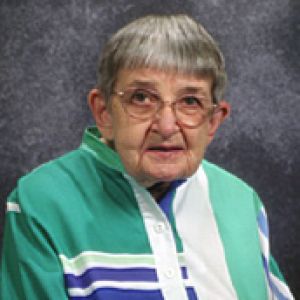 When we think of Sister Nancy we think of music, teaching, nursing, care-taking, cleaning, gardening, gluing puzzles, and story-telling. Music was definitely a recurring theme in her life. She began taking piano lessons when she was a young child and played the piano and/or organ the rest of her life.

Nancy Louise Wooldridge was born on March 11, 1932, to Roy and Henrietta Baum Wooldridge in Lewistown, Montana. She and her brother Joe, who is deceased, grew up with their mother and grandmother near their dry cleaning establishment in Lewistown. She attended St. Leo's parish school and was taught by the Sisters of Humility. Nancy completed her junior year in high school during the summer of 1948 and left Lewistown in the fall for the long train ride to Ottumwa, Iowa, to enter the Congregation of the Humility of Mary on September 8, 1948. She received the habit and her name in religion, "Sister Mary Eugenia," in the summer of 1949 and professed first vows in the summer of 1951. Sister finished high school at Ottumwa Heights Academy and began and finished an AA degree from Ottumwa Heights Junior College. Later she received a BA degree in education from Marycrest College in Davenport, Iowa.

Later Sister Nancy felt called to a nursing ministry and enrolled in an LPN program at St. Joseph Hospital in Lewistown and worked at the University Hospital in Albuquerque, New Mexico. After Vatican II, Sister answered the call of The Third World when she went to Mexico and worked in a variety of different areas including an orphanage. She then came back to the new Ottumwa Heights where she worked in the Care Center; but realized that she needed more current education. At that time her mother’s sister and her husband were elderly so she moved to their home in Richmond, Virginia. She took nursing classes at a local college, became a certified LPN, and worked in a nursing home. After her aunt and uncle passed away her interest turned to cleaning houses. Numerous clients kept her busy for several years.

Finally physical problems made it necessary for her to come to Humility of Mary Center. Her affinity for cats got her a job as a cat sitter for a lady who became a dear friend for the rest of her life. Sister picked up her music again by playing for Mass and other events. After she started playing the organ, the Carmelite Sisters at Eldridge asked her to come and play for some of their services. Later she taught one of them to play the organ. She frequently spent time at their monastery. As her health improved she took over the care of St. Joseph's Courtyard here at the Center. She and the gardeners at Green Thumber's Nursery were on a first name basis. Flowers in the courtyard flourished!

Jigsaw puzzles also fascinated Sister Nancy; she put together dozens of them, mounted them, glued the pieces to hold them in place, and sent them to clients of Humility of Mary Housing to hang in their apartments. After Hurricane Katrina, Sister was instrumental in gathering music songbooks and organized a trip to Mississippi to take the books to the area.

For many years Sister dealt with a swallowing problem which made living in community difficult so she moved to an apartment. She continued to live there until her health required more skilled nursing care, and she moved to Bishop Drumm Retirement Center in Johnston, Iowa, this past summer.

Sister Nancy carefully made out her funeral plans; selecting the readings and music for her wake and funeral. She was a thorough planner. My first thought when hearing of her death was a hope that she was enjoying her favorite meal to the tune of her favorite music.