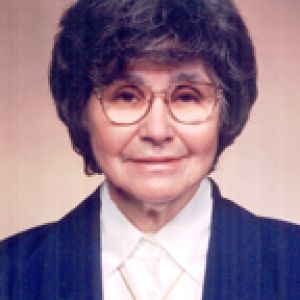 In the beginning of her book FOOTPRINTS, Sister Bernadine Pieper, CHM, explains her title by saying that "women and ordinary men too, have been making footprints, sometimes ignored, sometimes covered up, sometimes light, sometimes distinct, but always real." I think we could say that Sister Marilyn left thousands of footprints in dozens of different places; from Centerville, Iowa, (her hometown) to Des Moines, to the Quad Cities, to Mexico, to Chicago, to Peoria, to Arizona, to Texas, to California, to Kansas, and to Montana.

Juanita Pauline Reyes was born on March 2, 1919 to Victoriano and Mariana Vargas Reyes in Centerville, Iowa. Both of her parents were born in Mexico and came to the United States to escape political unrest in Mexico. She was the seventh of ten children and first to be born in the United States. Her father died when she was four years old, but her mother chose to stay in this country rather than go back to Mexico. Her parents and siblings, Feliciano, Joseph, Stephen, Santos, Margaret, Petra, Sanita Mancuso, and Petra Castillo are deceased. Her brother Victor and many nieces and nephews survive. Some of the information included in this paper comes from ideas and thoughts which Sister expressed in various papers and articles she wrote. She spoke of the CHM sisters coming to teach in St. Mary School in Centerville and how this inspired her to follow a vocation call to the Humility Congregation. Juanita attended Ottumwa Heights Academy in Ottumwa, Iowa. After high school graduation in 1936, she entered the Congregation of the Humility of Mary on July 3, 1936, received the habit and her name in religion, Sister Marilyn, July of 1937, and professed first vows in July of 1939.

Sister Marilyn began her college education during her novitiate at Ottumwa Heights Junior College receiving an AA, continued with classes at Marycrest College, Davenport, Iowa in the summers and received a BA in elementary education. Later Sister earned a MA in international relations from the University of the Americas in Mexico and completed ninety hours in continuing education followed by being a master’s candidate in religious studies at Mundelein College in Chicago, Illinois. Sister was always ready to learn more about her areas of interest. Sister Marilyn left many distinct footprints from time spent in classrooms.

In September of 1939 she began her teaching ministry at St. Anthony School in Des Moines and eventually stretched all the way to Montana. The year was 1966, and change was afoot in religious communities and the Catholic Church. Sister Marilyn returned from Montana and was assigned to St. Pius School in Rock Island. We were wearing modified habits and veils. We also could go out and about without a companion. Sister Marilyn was able to fulfill a lifelong desire to work with the poor. She found a neighborhood in the inner city of Peoria which matched her interest. She taught first grade at St. Pius in Rock Island Monday through Friday wearing modified contemporary clothes and then put her habit back on and went to St. Joseph Parish and community center in Peoria on the weekend. Thus began a new focus for Sister's ministry; the Hispanic community in Peoria. Her footprints stretched from Peoria to Mexico when she enrolled at the University of the Americas in Mexico. From 1980 to 1986 Sister Marilyn ministered as a religious education director, pastoral associate, and bilingual consultant in a number of cities in California, Texas, and Kansas. She attended Mundelein College while working in three different parishes on the south side of Chicago.

In 1992 Sister came to Humility of Mary Center in Davenport and yet another set of footprints came to be: that of volunteer and CHM ambassador at large. I have neither the time nor the paper to cover all of Sister's sites or events. Chances are if you were present at a political event or social service opportunity Sister Marilyn either was there or had been there at some point. If a sign-up sheet went up on the Humility of Mary Center bulletin board, Sister Marilyn's name was usually first on the list. She often went to Friendly House laden with goodies. In the evening it was off to Gilda's Club or some other activity. Sister often said of her activities; "I'm just evangelizing." She left evangelizing footprints on the soil from Chicago to Great Falls, Montana, from Peoria, to San Diego, from Des Moines to Mexico, from California to El Paso. Hundreds of people are better off as a result of her footprints, and our CHM community is richer for her having been among us for 78 years.