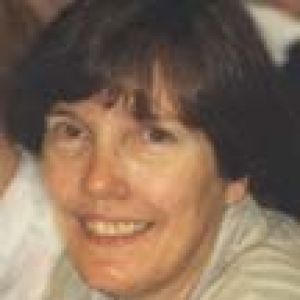 Tonight, as we assemble to celebrate the life and gifts of Sister Patrice Steffes, let us imagine ourselves at our annual community assemblies where we were greeted with a new decorative pin each year – dream catchers, ceramic rainbows, colorful balloons, tiny vases filled with miniature flowers – or artistic prayer cards, a carefully constructed biblical tent on each table – all representing the theme of that assembly and the upcoming year. These were the creative work of Sister Patrice who demonstrated not only artistic talent but also provided religious inspiration.

Patricia Katherine Steffes was born on August 19, 1942, to Lawrence Steffes and Margaret Frey Steffes in Great Falls, Montana. Both parents are deceased. She had a twin brother, Larry, who is also deceased. She said that both were tiny and that it was amazing both survived because this was before the technology existed that we now have for low weight newborns.

She is survived by her brother, John, from Minneapolis, her sister Jeanne Steffes from Great Falls, and her cousin Sandy Simpson from Seattle, Washington. John is with us tonight.

Patricia graduated from Catholic Central High School in Great Falls, or Great Falls Central as it was commonly called, where she became acquainted with the Sisters of Humility. She entered the Congregation of the Humility of Mary in Ottumwa on September 8, 1960. They were first class to enter at the new Ottumwa Heights. In 1961 she received the habit and her name in religion, Marie Patrice. Other Montana classmates are Sisters Kathleen Hanley, Rosie Restelli and Johanna Rickl; Sisters Judith Carrara, Donna Donovan, Kathleen Henneberry, Catherine Linnenkamp, Nancy Schwieters and Penelope Wink comprise the rest of her class.

She received an Associate of Arts degree in Home Economics from Ottumwa Heights College. Following her profession of vows in 1963 she began her ministry by caring for infants and toddlers at the Christ Child Home in Des Moines, Iowa, from 1964 until it closed in 1966.

She assisted in the library at her alma mater, Great Falls Central High School, while completing a B.A. degree in Elementary Education and Art from the College of Great Falls. She then began her career of teaching art in elementary schools in Minneapolis, Bettendorf and Davenport. She always loved children and that love was nourished in both ministries of child care and teaching.

After she retired in 2003 she moved to Humility of Mary Center. She volunteered at CASI (Center for Active Seniors of Iowa) where she taught arts and crafts to participants. Her gentle spirit served her well with adults as well as with children.

Patrice moved to Bishop Drumm Retirement Center in 2006. Her good friend Sister Marianne Nehus says that Patrice’s first ministry at Drumm was to herself, accepting the diagnoses of epilepsy and Alzheimer’s disease that had brought her there. As both conditions progressed, her ministry – maybe her most important one – was to others, teaching and allowing them to love and care for her.

In her “block” on the bicentennial quilt at the foot of the steps to the dining room, Patrice shows a figure at an easel, a cat at her foot, surrounded by the things she named as important to her: community, friends, family, teacher, children, animals, art, gifts from God, angels and bike riding. Her love of animals and nature is evident in the picture display in the community room.

Let us imagine her now, sitting in a biblical tent, surrounded by butterflies, balloons, flowers, rainbows and all things furry, and waiting for the rest of us to arrive.