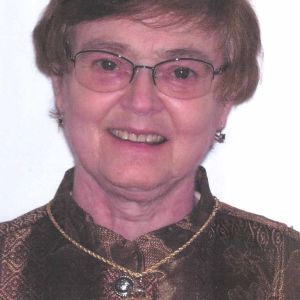 Today we gather to remember and celebrate the life of Sister Marilyn Anne Brinker. It is with humility that I offer these words and thoughts about someone who was so adept herself at the use of words. Her own poetic words, from her book, A Joy-Filled Journey, are reflected in this presentation.


Marilyn Brinker was a country girl for whom land and nature were very important. In January 1978 from the poem, “Glory in the Journey”, she wrote:

Day by day I seek the purpose of my life.

God’s will is my intention.


Marilyn Anne Brinker was born in Harlan, Iowa to Edmund and Cleta Hodapp Brinker on May 19, 1943. She grew up with her siblings Clarence, Kenneth, Jane and Joann on a farm near Westphalia, Iowa. They worshipped at and attended school at St. Boniface.


Marilyn began her journey in religious life on September 8, 1961 when she entered the Congregation of the Humility of Mary in Ottumwa, Iowa. She received the habit and her name in religion, Sr. Mary Edmund, in July 1962 and professed first vows in July 1964. From that class she is survived by Sister Sheila Seng and associates Maria Miller Delsing and Virginia Ricke.


She obtained her Associate degree at Ottumwa Heights Junior College and completed a BA in Elementary Education at Marycrest College in Davenport, Iowa. Later Sister earned a Master of Science in Education in Elementary Curriculum and Instruction from Drake University in Des Moines, Iowa.


After getting her BA, Sister Marilyn’s education ministry began with teaching at St. Vincent’s School in Davenport, after which she taught at St. Pius in Des Moines, St. Patrick’s in Missouri Valley, and later at St. John’s in Burlington, all in Iowa.

Along with her friend, Sister Dorothy Chevalier, she left Iowa to teach in Spring, Texas, and at Hampton, Minnesota. In an article in the May 1990 issue of the community publication, "Response," Sister Marilyn listed her responsibilities at St. Mathias School in Hampton as:

Teacher, guide, counselor, leader, initiator, facilitator and ‘mother,’ as well as helping with music for liturgical celebrations.” She was quoted, “The thing I like best…is being with children….I enjoy their simplicity, their openness and sheer joy. They keep me young and happy.” It was stated that Sister Marilyn could perform at any position in the elementary grades. Perhaps describing this period she had written,


Along the journey I need to be rooted,

yet freely continue to advance in an ever onward mode.

After being diagnosed with severe rheumatoid arthritis and other chronic conditions, Sister Marilyn no longer had the stamina to work in the school setting. An issue of the National Catholic Reporter appeared in her mailbox one day. Opening it, she discovered and answered an ad for candidates for a program in Clinical Pastoral Education at the University of Iowa in Iowa City. Upon completion of that program she and Sister Dorothy began work as pastoral ministers at St. John’s Medical Center in Tulsa, Oklahoma, and later at the Jane Phillips Medical Clinic in Bartlesville, Oklahoma.


Although she had written poetry all her life, she now did so more frequently as a means of coping with her own constant discomfort and to help those she encountered in her ministry. It is not surprising that many of her verses speak of beginnings and endings, life and death.


At the celebration of her Golden Jubilee in 2011, she offered these lines in her reflection about “Living the Journey”:


It involved following one’s intuition, feelings, and inner spirit.
It meant trusting one’s openness in ministry while celebrating life experiences.
It demanded discerning decisions, managing difficult choices, taking risks for the good of the whole, while being guided by the presence of the Holy Spirit.


Surely there was jubilee in heaven when her wish of celebrating Easter with the Risen Christ Himself was realized. Perhaps this sums up her message of reassurance to us at this time:

It is the ability to be open to ups and downs,

Self-assurance and inner depth that marks the signpost saying:

‘Glory and grace, peace and love are mine.’


We ask that Sister Marilyn help us in our journeys as we enter into a new relationship with her in the communion of saints. May she and all the deceased Sisters of Humility and associates rest in peace. Amen.