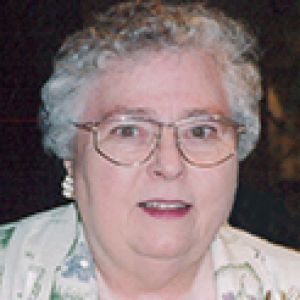 If I asked the sisters here, what do you remember about Sr. Marcia, at least some of you would answer “Her Irish heritage!” Indeed she loved to celebrate St. Patrick’s Day by throwing a party, here at Humility of Mary Center for many years, but wherever she happened to be on March 17, there was always singing and grasshoppers and laughter.

On that note of joy, we welcome nieces and nephews, and their families; sisters and associates of the Congregation of the Humility of Mary; and Sister Marcia’s friends and acquaintances to this celebration of her life. Being so well known in the area, we look forward to hearing stories about how she related to your lives.That time for sharing comes next.

Marcia Alice Costello was born in Davenport to James Vincent Costello and Florence (Neuhaus) Costello on October 19, 1931. Her parents and her brothers, James and Don, preceded her in death.

She said that she knew from age 10 that she was going to be a sister but she had three things on her “bucket list” before entering: to complete a degree, to date a nice Catholic young man and have a good time, and to ride to the convent in a Cadillac. In 1953, with a degree from Marycrest College, and having dated a Catholic man for more than two years, her father bought a “baby-blue” Cadillac in which she rode to the Humility of Mary motherhouse in Ottumwa on September 8.

At her reception the following summer she received the name Marcia Marie. Her class were the “senior novices” when I entered the community in 1955.They made final vows in 1959. Surviving CHM classmates are Sisters Miriam Ehrhardt, Joann Kuebrich and Cathleen Real here in Davenport and with us tonight, and Sisters Jeanette Kopel and Mary Rocca at Bishop Drumm Retirement Center in Johnston, Iowa.

After teaching in the elementary grades in Ottumwa and Centerville, in 1964 Sister Marcia went to Bourgade High School in Phoenix where began her professional career in journalism.There she was responsible for public relations including news releases, the school newspaper and photography. At Aquinas High School in Fort Madison she had similar responsibilities plus the yearbook.

Following the conclusion of the Chapter of 1968-69, which established much of the current government structure of our congregation, in 1970 Sister Marcia opened the CHM Office of Communications at the Motherhouse in Ottumwa.The Community Directory was introduced at that time.The next year she was hired by Assumption High School where she was not only the communications coordinator but also the Assistant Development Director.

During her almost 17 years at Assumption, she laid the groundwork for the Assumption Alumni Association and introduced THE KNIGHTLINE, the alumni magazine. She taught classes in journalism, photography and the yearbook, and lectured in American history. In her spare time she operated the book store.

At Marycrest College, and then Marycrest College/Teikyo Marycrest University she served in Public Relations and Development capacities between 1989 and 1993. In 1995 she became Director of Communications for the congregation.

Just a couple of years earlier, communicators from women’s congregations of the upper Mississippi valley region of Iowa and Wisconsin came together to discuss challenges of public perception about contemporary religious life, -- think “Nunsense,” pictures of sisters in habits at ballgames, not at food pantries – and to explore avenues of collaborative communications.We are one of twelve congregations that formed SUN, Sisters United News, whose mission statement says SUN is “…dedicated to promoting and publicizing the values of Catholic Sisters living the Gospel in today’s world….values such as: seeking God together in prayer and spirituality; living in right relationship with all of creation; and working for peace through justice.”

Sister Marcia helped build the early record that has led to SUN’s many awards over the years. SUN has been copied by other congregations throughout the country and even its name has been shared. Also, during her tenure Sister Marcia introduced the photography contest in which many of us were able to show our skill at the annual assemblies.

Following her retirement Sister Marcia volunteered for the Retirement Collection for Religious. She coordinated presentations by sisters in parishes throughout the Diocese of Davenport in advance of the annual collection.

Few of us can claim the number of people who knew or knew of Sister Marcia, relatives, friends and acquaintances that she had. We remember former associate, Catherine Enderle, whom she accompanied during Catherine’s progression into dementia and death in 2007. Likewise, she suffered with Maureen O’Conner, Miss “O” of the Assumption faculty, who died too young of cancer. Sister Marcia surprised many of us by showing up at the vigil service for brother, Don, not too long ago. During her own health challenges she found ways to continue her connections through emails and Jacquie Lawson e-cards, and visiting people at the Kahl Home until she had to give that up too.

Sister Marcia’s unselfish love is an example for each of us; we cannot go wrong in imitating it as she did the love of our brother, Jesus, who gave his life for each of us. We ask that she help us to imitate that love as we enter into a new relationship with her in the communion of saints. May Sister Marcia, the deceased Costello and Neuhaus family members, all the deceased Sisters of Humility and associates, and all who have gone before us rest in peace. Amen.