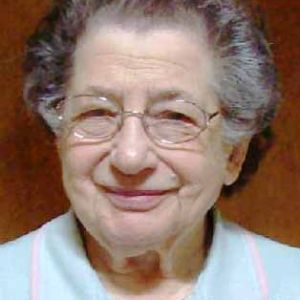 We are here to remember the life of Sister Mary Anne Leto who will celebrate 70 years as a Sister of the Humility of Mary in heaven next year. At the same time we are thankful for the two remaining Humility sisters of her class, Sisters Miriam Anstey and Marie Vittetoe.

Sister Mary Anne was welcomed by her parents Ignatius and Josephine Collo Leto on February 16, 1928, on the south side of Des Moines. She had siblings: sisters Rosalie and Frances, and brothers Joseph, Sam, John and Nelo. In addition to her parents, her sisters Rosalie Caponigro and Frances Muller and brother Joseph are deceased. Her brothers Sam, John and Father Nelo, plus many nieces and nephews and their families remain and were blessed by her life. .

The Leto children all attended St. Anthony parish and school where they met the Sisters of Humility. After graduating from St. Joseph Academy Mary Anne entered the community in Ottumwa on September 8, 1946, and received the habit a year later. She requested and received the name, Sister Mary Jacinta, after one of the children to whom the Blessed Virgin had appeared at Fatima. She received an Associate degree from Ottumwa Heights College and began teaching after making first vows in 1949. At that time many sisters were teaching having obtained State of Iowa certification following completion of an Associate degree. They would continue college classes on weekends and summers. Members of the “baby boomer” generation were just beginning school then which meant large classes of 40, 50 or more students, especially in cities..

She completed a BA degree at Marycrest College and a master in education at Drake University. Altogether Sister Mary Anne taught for 30 years in schools in Iowa and Montana. Among her records are pages with the names of the sisters with whom she lived during each of those years. She taught in three of the public schools in Iowa where sisters were permitted to teach: Parnell Consolidated, Cosgrove Consolidated and Melrose Public systems. Beginning in 1974 she began helping on weekends and summers at the Bishop Drumm Home, then on Clark Street in Des Moines. She was certified as a Nurse Aide and in 1980 became Activity Director at the Bishop Drumm Retirement Center, now in brand new facilities in Johnston, Iowa..

Therefore, when the congregation, in cooperation with the Sisters of Mercy, built a wing and chapel on to the Drumm facility for the care of Humility sisters, Sister Mary Anne would extend her work to include our own sisters in 1995. She continued as Activity Director and added Pastoral Care, then was named Coordinator for the sisters after Sister Ann Leahy retired in 2000. While she had him, every where that Mary went, her little white dog “Peaches” was sure to go. She continued as Coordinator until 2008 when she retired and went to live in the family home with Father Nelo. After a fall and Father Nelo’s stroke she became a resident of Bishop Drumm herself, allowing others to help with her care..

Sister Mary Anne was very proud of her Italian heritage. Sister Marie Vittetoe, remembers the wonderful Italian cookies her family would bring on “visiting Sundays” in the Novitiate. Included were Italian wedding cookies – round balls with anise flavoring; the flat “pizzales” made with a special iron; and fried strips of dough that were braided and drizzled with colored frosting that some people call “wandas”. The family was very proud of Father Nelo, a priest of the Des Moines diocese.

Sister Mary Anne had engaged in activities in the broader community as a member of the Sisters Council of the Diocese of Des Moines and service on a Board of the National Conference of Christians and Jews. She was one of the first group of CHMs who went to Villa Maria in Pennsylvania to become acquainted with our “sister community” there.

Sister Mary Anne brought a warm, kindly demeanor to those she served, be it students, elderly residents or her CHM sisters. We remember her smile and will miss it. May we grow in kindness to each other as we enter into a new relationship with her in the communion of saints. May Sister Mary Anne, the deceased Leto and Collo family members, all the deceased Sisters of Humility and associates, and all who have gone before us, rest in peace. Amen.