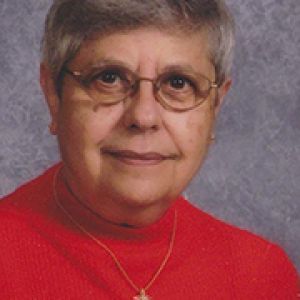 Welcome to all family members, teaching colleagues, friends, former students, and CHM Sisters and Associates as we gather to remember and celebrate the life of Sister Joanne Mauro. Seeing the size of this group one wonders if there is anyone from this area of Des Moines who is not present. Sister could always draw a crowd! Sister and I were novitiate classmates and have known each other for 58 years.

Joanne Kay Mauro was born to Joseph and Margaret Rand Mauro on February 5, 1940 in Des Moines, Iowa. The nine children in the Mauro family attended St. Anthony Church and School along with dozens of cousins. Sister Joanne was preceded in death by her parents and youngest brother Ralph(Marty). She is survived by brothers Don(Lorene, Frank(Cora), Joe(Joanne), John(Grace), and Michael(Dorothy), and by sisters Roseanne McCargar, Theresa(Chi-Chi) De Francisco plus numerous nieces, grandnieces nephews, and grandnephews as well as Sisters and Associates of the Congregation of the Humility of Mary. Known only as “Sister” by her family, she was extremely proud of her Italian heritage just as her family was proud of her. After her mother’s death she remained in the family home on Granger Street until coming to Mercy Hospice in Johnston. She continued to host Christmas Eve dinners, family reunions, holiday dinners / celebrations as well as providing living quarters for family at various times. Each new addition to the clan received a hand crocheted baby blanket. I cannot even guess how many baptisms, first communions, confirmations, graduations, and weddings she attended.

Early on in her childhood she began to think about joining another family; that of a community of religious sisters. After eight grades at St. Anthony’s and graduating from St. Joseph’s Academy, Joanne entered the Congregation of the Humility of Mary in Ottumwa, Iowa on September 8, 1957. One month to the very day of our entrance as postulants a terrible fire burned Ottumwa Heights Academy, College, Noviviate, and Motherhouse to the ground. The next day the new postulants found themselves in Davenport, lowa living at St. Vincent’s Orphanage and attending classes at Marycrest College. Eventually they moved back to Ottumwa and finished their three years of novitiate at the old WWII Airbase.

I (Sr. Micheline) first met Joanne when I joined the group in February 1958. In July of that year we received the habit and our religious names. Sister received the name Sister Mary Margene in honor of her mother and St. Margaret Mary Alacoque for their devotion to the Sacred Heart of Jesus. To say our novitiate days were filled with unique activities would be a gross understatement. You see, our novice mistress was Sister Mary Florence, former teacher and principal at St. Anthony’s. Many of you probably remember her. She worked us every bit as hard as she worked her students. Even though Sister Joanne was the youngest in our class and knew Sister Florence Sister cut her no slack. I recall a hot humid summer in 1959 when we had a very large cucumber patch across from our BOQ building. Each day we were sent out to pick the cucumbers so that pickles could be made for the coming winter months. Someone told us that if you squashed the bright yellow blossoms, then you could halt the production of cucumbers thus eliminating a hot sticky back-breaking job. I can still see Joanne gleefully stomping on the blossoms.

Sister Joanne continued her education; receiving an AA from Ottumwa Heights College, a BA in elementary education from Marycrest College, and a MA in elementary counseling from Drake University in Des Moines. Sister’s education ministry included teaching primary grades at the following schools in Iowa; St. Patrick, Ottumwa, St. Alphonsus, Davenport, St. Mary Centerville, St. Joseph, Neola, St. Mary/Henry, Marshalltown, St. Theresa, Christ the King, and St. Anthony in DesMoines. Her only out of state venture was at St. Austin in Minneapolis. She made good use of her traveling trunk!

She was definitely a woman of prayer and often visited Sister Mary John Byers who guided her on her spiritual journey. I am certain that Sister Mary John who has preceded her to the heavenly realm has been guiding Joanne during this last journey as she faced her illness so bravely and gracefully. We can be sure there is much rejoicing as she joins both her immediate family and her religious sisters and associates in a celebration with pasta china.