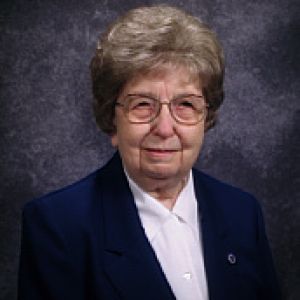 We welcome all of you to Humility of Mary Center and to our prayer service remembering and celebrating the life of Sister Carolyn Walters. Some of you may remember her better as Sister Joseph Mary, the Registrar, at Marycrest College. In Search and Service, our Constitutions, we read: “The ministry of the individual sister reflects the mission and goals of the congregation….” In the Missioning Ceremony the President sends each sister to a “ministry which responds to the call of the Spirit in the signs of our times.” These words certainly provide a framework for Sister Carolyn’s life as a Sister of the Humility of Mary.

Carolyn Mildred Walters was born on June 21, 1919, in Beaconsfield, Iowa, to Bert and Margaret O’Grady Walters. She and her older brother, Francis, grew up on a farm in Ringgold County in southern Iowa. She is pre-deceased by her parents, brother and sister-in-law. Five nieces plus cousins survive. After graduating from Beaconsfield High School, Carolyn entered the Congregation of the Humility of Mary in Ottumwa, Iowa, on January 6, 1937. She came to know the sisters because they taught vacation school each summer at St. Patrick’s Church in Grand River where she attended. That July she received the habit and her name in religion, Sister Joseph Mary. In July of 1939 she made first vows. Sisters Marilyn Reyes, Cecelia Vandeberg and Carolyn celebrated their 75th anniversary in the community together in 2011. Sister Cecelia remains with us.

Sister Carolyn received an AA degree from Ottumwa Heights College, which qualified her for teaching, while in the novitiate. It was the custom for each sister to receive a small holy card on or about August 15 with the destination for her ministry for that year. She went first to St. Mary’s School in Ottumwa to teach for a year, then to Cosgrove Consolidated School, a public school where the sisters were allowed to teach but did not wear their crucifixes. From there she went to St. Anthony in Des Moines, then to Georgetown, another public school system where she ended her traditional teaching career. We shall see that, like many others, she was to continue learning and teaching all of her life.

In 1943 Sister Carolyn was named assistant to the dean, Sister Hazel Marie Roth, at Marycrest College in Davenport, and received a BA in Education from the college in 1944. In 1954 she was named Registrar, a position she held until 1970. It was during this period that many Marycrest students came to know her. It will not be too big of a surprise to learn that, years later, she would return to the college to serve as Coordinator of Alumnae Affairs.

When, after Vatican II, CHMs were encouraged to discern their own ministries, Sister Carolyn pursued her long interest in care for the elderly. She obtained an MS in Gerontology from the University of South Florida in 1971. This was followed by a year’s internship at a Jewish retirement home about which she spoke so highly of their approach to care. Realizing the importance of the spiritual component of ministry to the elderly, she completed a year in Clinical Pastoral Education (CPE) sponsored by the University of Chicago in 1972.

She served her CHM sisters in preparing for retirement and actual retirement programs at Ottumwa Heights from 1972 to 1974. She obtained a position in the Social Concerns Office in the diocese of Jefferson City, Missouri, doing outreach to the aging. After just a year there she resigned to take care of her aging father until his death in 1978. She returned to the mother house to care for our elderly sisters as a nurse-aide, with certification from Indian Hills Community College, until 1982. It was then that Ottumwa Heights College and the entire property of the congregation was sold to the community college.

Sister Carolyn was recruited by Marycrest College to become coordinator of Alumnae records, updating mailing lists until 1992 after the Teikyo Corporation purchased the college. She continued living on campus, volunteering as sacristan and in other capacities until she moved to Humility of Mary Center. She made her own choice in 2012 to move to Bishop Drumm Retirement Center where she lived until her death.

Sister Carolyn has left lasting records of her caring heart. In the late 1960s she established what may have been the first, or at least a very early, hotline for calls from persons in distress or, simply, from lonely individuals. She and several other retired Marycrest staff maintained a call service, physically based in one of the confessionals in the big Peterson Hall chapel on the campus. Word soon spread and, before long, they were receiving more calls from parties interested in starting a similar service in their own communities than from distressed persons. She also co-founded the Quad-Cities Chapter of the Alzheimer’s Disease and Related Disorders Association (ARDA) that meets monthly today. From those who came to the meetings, she learned of the physical and psychological fatigue experienced by caregivers of those with dementia. She personally went to homes to relieve these responsible individuals so they could go shopping, rest or do whatever they needed to do for a few hours. We now call this “respite care”. She was also instrumental in establishing a telephone service for home bound persons enabling them to talk to folks and to have something to look forward to. Sister Carolyn received awards both for her work at the college and for the elderly.

For many of us our memory of Sister Carolyn is a sister, quietly carrying a meal-tray, covered by a silver cake cover, across the Marycrest campus, rain or shine. This “service”, which she says she did for twenty years, is memorialized in her quilt square. We did not see her balancing the tray, while climbing three flights of stairs in Upham Hall, bringing it to a sister who was unable to go to the sisters’ dining room. It takes some skill to manage the long habit skirt in one hand and the tray in the other when going up those stairs. But she did it quietly and without any fuss which was characteristic of how she lived her entire life. Despite her quiet and reserved demeanor, she will be missed very much.

We ask that Sister Carolyn Walters help us as we enter into a new relationship with her in the communion of saints. May she and all the deceased Sisters of the Humility of Mary and associates, and of the Walters family rest in peace. Amen.