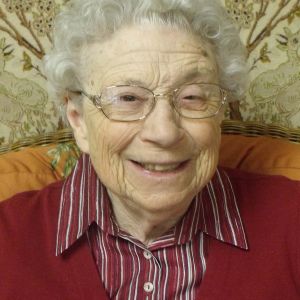 Teresa Angeline Keough was born on October 4, 1922, in Opheim, Montana, the 13th and last of the children of George and Catherine Keough. Along with her Creator, she has been welcomed by those six brothers and six sisters into eternal life. We are happy to welcome some of her family members, niece Mary Murk of Missoula and great niece Linda Buss and her husband Steve of Rochester, MN.

While in the novitiate Sister Ursula completed the two-year normal school at what was then Great Falls College. She received a BA degree in Home Economics at Marycrest College in 1953. She continued study at the graduate level at Marycrest, the College of Great Falls, and St. Mary’s College in Maroga, California. She progressed to classes in theology and religious education as her ministries moved from classroom teaching to pastoral work, primarily with adults. Sister’s ministries included schools and parishes in the dioceses of Great Falls and Helena in Montana, Eau Claire, Wisconsin and Davenport and Des Moines in Iowa.

Sister Ursula celebrated her golden jubilee of vows in Davenport at a community celebration on August 5, 1990, at Sacred Heart Cathedral. On September 8 there was a big celebration of the anniversary at Guardian Angel Church in Power, Montana. In expressing his disappointment at not being able to attend the event, Bishop Elden Curtiss of Helena said, “You are loved and admired and supported by multitudes….” By this time the multitudes included members of parishes in Libby, Missoula, Plains, Thompson Falls and Dutton in the Helena diocese.

The lengthy article in The Montana Catholic at that time tells us what led to Sister’s shift from the classroom to pastoral ministry. Paraphrasing, she said, “…Right after Vatican II we were teaching the children the newer ideas of theology and the more open way of operating in the Church. When they tried to explain it to their parents, it wasn’t making sense. It seemed like it was creating a division rather than having parents and children on the same track. So I began to feel it was important that we work more with the adults and then, in turn, help them work with their children.” Therefore, in 1973 she left classroom teaching and moved to parish work. She was the first sister to be appointed as pastoral assistant of a parish without a resident priest in the Helena diocese.

In that same article in The Montana Catholic she also observed, “It seems that wherever you go you have to make the path by walking…because it’s a little different each time. And yet, I feel a lot of acceptance from the people.” That acceptance led to leadership positions as President of the Missoula Ministerial Association and Member of the Synod of the Diocese of Helena in 1988 where she led one session.

In 1988-89 Sister Ursula spent part of a Sabbatical Year living with Sister Mary John Byers and volunteering at Project Renewal in the inner city of Davenport. It was during the Thanksgiving and Christmas seasons when there were neighborhood parties, food boxes and gifts to prepare. In the CHM publication Response she described it as a “collage of many experiences, pictures, feelings and much giving and receiving.“ She then went to the St. Louis area where she received a certificate for participating in the “15-week Exodus program of priestly and spiritual renewal” in Dittmer, Missouri.

Sister returned to Montana and became part of a pastoral team with Sister Johanna Rickl serving the Conrad and Dutton parishes. In 1990, Bishop Curtiss appointed her Pastoral Administrator of St. William Parish, Dutton, and Guardian Angel Mission in Power where she served for four years. She moved to Missoula, living with her sister, Pauline, and nephew, Dan, while working at Holy Family Parish as Religious Education Director for three years. Her ministry history indicates she “retired” in 1998 but continued as a “volunteer” in parishes in Missoula.

Following an accident in which she lost her left eye, Sister Ursula moved to Humility of Mary Center in August 2002 to recover. A few months later she became a member of the New Hope Community in Des Moines when it first began that October. This was an experimental community that promoted prayer and ministry in common, as well as community living when possible. Her service was hospitality, a high priority for New Hope. She answered the phone and welcomed neighbors at the door in the apartment complex where she and other members of the community lived. Her hospitality and smile was extended, also, to CHMs and others from out-of-town who needed a place to stay overnight.Truly, the New Hope Community and life with the people of the Riverbend Neighborhood in Des Moines brought her much joy which she shared with many others.

In 2010 Sister moved to Humility of Mary Center where she was a lector, communion minister and sacristan among other things. She was a regular card player and might be seen playing Yahtzee with members of the New Hope community when they were around. She had introduced the associate program to Marilyn Blazevich from Missoula and Margaret Halvorson from Libby and continued as “contact sister” for them until her death. In Iowa she became the contact sister for Sheryl Hughes-Empke, who had been part of the New Hope community, and for Carol Paar from Davenport.

Sister’s final illness was relatively brief. While receiving onsite hospice care here at Humility of Mary Center, she was accompanied by sisters who spent time and prayed with her. After Mass on Sunday morning, February 28, Father Fortunatus anointed her. She died peacefully within a few hours.

We ask that Sister Ursula Keough help us as we enter into a new relationship with her in the communion of saints. May she and all the deceased sisters and associates of the Humility of Mary community, and deceased members of the Keough family, rest in peace. Amen.