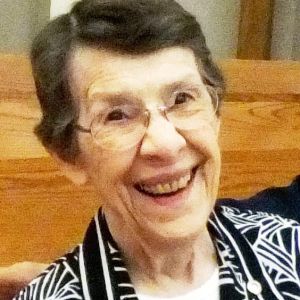 Lucille Catherine Takes was born in Cascade, Iowa, in 1925. She entered the Congregation of the Humility of Mary in 1954 and made her final profession in 1960 receiving the religious name Mary Carla. Her life as a Sister of Humility was one focused on a ministry in education. Starting in 1960 Sister Carla was director of student services at Ottumwa Heights College for ten years and then the registrar for another ten. She was the registrar at Assumption High School from 1979 to 1995. From 1998 to 2002 she worked in the library at Marycrest International University until her retirement. During retirement Sr. Carla dedicated many hours and years to volunteering at the Mississippi Valley Regional Blood Center.

Click here for a story titled "Life Giving Satisfaction" by Sr. Carla in "A Nun's Pocket"

Our prayer, “May she REST in peace” may be posed as a question in Sister Carla’s case as “rest” didn’t seem to be part of her life among us. She was always busy doing something, be it ironing altar linens or writing offertory petitions for Mass while substituting at the reception desk.  And what she did was always done to beautiful completion. Of all CHMs, she merits a “very good, C+”, the grade of “achievement” from Sister Muriel Hogan from the Ottumwa Heights education department.

Lucille Catherine Takes was born on July 16, 1925 in Bernard, Iowa, to Fred and Anna Wagner Takes. She was the first of eight children, five girls and three boys. Of the eight, Frank, Harold and Rita are deceased. Surviving siblings are Sr. Maribeth, and Earl, Grace and Marion.

Lucille graduated from North Garryowen High School in 1942 and attended Clarke College in Dubuque for one year. For three years she taught grades one (1) through eight (8) in the Bernard Independent School District. She then worked as a bookkeeper at Dubuque businesses for five (5) years. She met the Sisters of Humility of Mary at Marycrest College which she attended for three (3) years, graduating in 1954 with a degree in Sociology.

The fact that the five (5) Takes sisters all ended up at Marycrest was due to a question from a priest of the Dubuque archdiocese in 1951. When asked what her plans were for the future, Rita, who was working at the archdiocesan office for the third year, responded that she would like to go to college out of town. He suggested a visit to the Marycrest campus as he was a good friend of Bishop Henry Rohlman who was instrumental in its founding. This suggestion was certainly unexpected as most Catholic girls were going to nearby Clarke College in Dubuque or Mount Mercy in Cedar Rapids. Further, the Humilities were unknown to the Takes family. After all, they had aunts who were Mercy and Dubuque Franciscan sisters who had invited them to join their communities.

A Sunday visit to the campus in 1951 resulted in Betty, who had completed two years at Clarke and was working, Lucille, who had one year at Clarke, and Rita starting as junior, sophomore and freshman students, respectively, at Marycrest that fall. All were “non-traditional” students for that time as they were into their twenties. The following September 1952, there was a Takes in every class at Marycrest as Grace started as a freshman in dietetics. By that time Betty, now a Humility postulant and later to be Sr. Maribeth, was a senior in art education, Lucille was a junior, and Rita was now a sophomore in dietetics. Youngest sister, Marion, also graduated from Marycrest eventually.

Lucille entered ­the Congregation of the Humility of Mary on September 8, 1954 and received the habit and her name in religion, Sister Mary Carla, the following summer. She was professed in 1957. She has surviving “classmates” Srs. Maggie Bennett, Justine Denning, Claudellen Pentecost and Dolores Schuh.

Sr. Carla was a fixture at Ottumwa Heights College for many years. “The fire” burned the whole complex to the ground just months after her profession. She helped organize work and workers in its aftermath. She later wrote that life at the former naval airbase for three years was unique. Movement of the college institution from that location to the new buildings in 1960 was a “once-in-a-lifetime” happening. She was director of student services there until 1970 and registrar until 1979. At the time of a reunion of all Ottumwa Heights alumnae in 1994, she said, “I got to know many students from a wide variety of cultures and they taught me so much…on and off campus activities tested my creativity and ingenuity. My domestic talents were put to use…on the costume committee for the musicals…”  She also admitted that the residence responsibility was the most challenging of her “missions”.

From Ottumwa Sr. Carla went to Assumption High School in Davenport where she was also registrar for more than 15 years. Part of that time she lived in the Assumption convent that was opened in December 1958 when 26 BVM sisters on the Assumption faculty and staff filled it to capacity. By the early 1970s, the place had become a “non-traditional” convent when it was opened to members of other communities, or to “OCs” as they were called. It became a popular place to live or to stay during travel or even vacation time.  There were always some retired sisters there who made the place “pleasant”. In addition to helping with meal preparation and decorating the dining table, Carla added that they defrosted the refrigerator and freezers, and did chapel ironing – tasks all too familiar to her. She wrote that she was “so impressed with their wisdom, generosity and spirituality.”  She lived there until the convent closed in 1995. She retired from Assumption then and went to live at Pleasant Street with other CHM sisters.

In August 1992 Sr. Carla was among Seeds of Hope volunteers in Colorado Springs under the direction of Sr. Bea Snyder. She couldn’t believe that up to 400 persons might come for the meal at the soup kitchen. She described the experience as “like another world” from which she gained a, “heightened awareness of simple living, conservation of energy (solar ovens), recycling, trust, poverty and skill sharing.” She also had an opportunity to spend time with sister, Marion, during that visit.

Following her “active ministry” Sr. Carla worked part-time for five years in the Marycrest College library until the college closed in 2002. She was a faithful volunteer for the Mississippi Regional Blood Center, reminding John Deere employees about their scheduled appointments for many years. At Humility of Mary Center she was Sacristan and adjusted to many different celebrants. She and Sr. Maribeth had a special box made for storing the long, white pall placed on the sister’s casket at the time of the Funeral Mass.  Often, after the evening meal, she could be seen in the sewing room, hemming napkins with beautifully, squared corners. She kept the flowers that were placed on the sisters’ graves for Memorial Day in good shape, sometimes having to deal with wet and muddy remnants after spring rains.

The Humility of Mary Center was a convenient place for Takes family gatherings, accommodating out-of-town visitors while they connected with family throughout eastern Iowa.  The grandkids used the pool to their delight. Family bonds were apparent during Sr. Carla’s last months. She had regular visitors, some celebrating the Sunday liturgy with her when she could be brought to the chapel in a wheelchair.

When Sr. Carla went to Colorado Springs as a Seeds of Hope volunteer, she wanted the time “to be productive, enjoyable and safe...”  What a legacy she has left for us! Her time on earth was certainly productive and enjoyable. I have no doubt that she is safe in the arms of the God to whom she committed her life.