A Time to Heal, to Help, to Forgive

Pope Francis has declared December 8, 2015, through November 20, 2016, the "ExtraordinaryJubilee Year of  Mercy." He is inviting all of us to see with eyes of mercy. In a world where millions of refugees are fleeing from war and terrorism, and religious intolerance is growing, Pope Francis trusts that this Year of Mercy will foster encounters and dialogue with Judaism, Islam and other noble religious traditions.

The CHM Sisters didn't wait for Dec. 8th to get started. Here is video from Nov. 13, which beautifully captures an Iowa faith leaders' prayer gathering for Syrian refugees. CHM Associate Sheryl Hughes-Empke, an Episcopal priest, is saying the opening words and speaking later is CHM Sister Jeanie Hagedorn--the one who is rocking a Nun's on the Bus sticker.

Then on Thursday, Dec. 3, the sisters hosted the 7th Annual Holiday Gift Swap. Not only is the swap an informed way to shop without creating waste, it also offered an opportunity for those having trouble making ends meet to shop without cash. One participant said, "I'm personally thanking each of you. I had amazing conversations and found great gifts. Considering all that has happened lately, this was a definite God sent event. Merry Christmas." 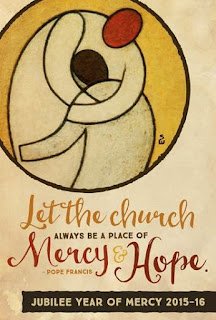 And on Saturday, Dec. 5, Sister Mary Bea Snyder formed a 10 person team, including me, to package "Kids Against Hunger" meals. We were a part of 1600 Muslims, Jews, Christians, Buddhists and people of various other faiths joined in a common cause to pack up 250,000 meals for hungry Syrian refugees in Jordan and Greece.

Good works for those in need is continuous for the sisters. Every day and every year. But special for the Year of Mercy our CHM sponsored ministry, The Prairie Retreat, has taken up the shepherding challenge by offering programs in 2016 on the theme of mercy. Plan to attend one or more as a part of your jubilee experience.
It is a favorable time to heal wounds, a time to offer everyone the way of forgiveness and reconciliation.