An Invisible Cloak of Love 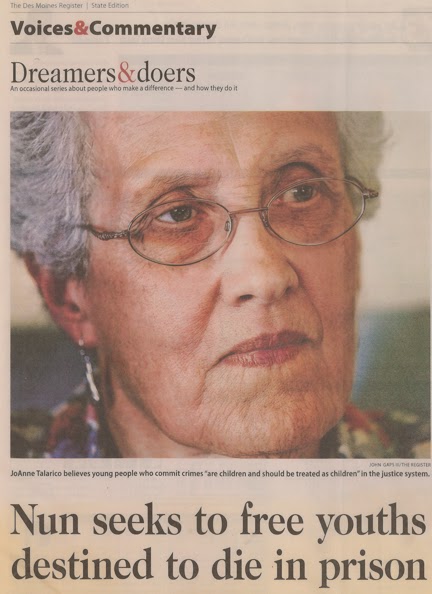 Compassion is one of the pillars of the CHM community. Sister JoAnne Talarico exemplifies compassion through her commitment to social justice.This commitment has taken her to El Salvador, seen her marching and speaking out for civil rights and advocating for homeless veterans.

JoAnne's restorative justice work began in 1987 when she was asked  if she would visit a teenager, Christine, who had recently begun serving a life sentence at a women's prison. JoAnne's calling wasn't prison ministry, but she did agree to see the young girl; she's been visiting her almost weekly ever since.

Christine wrote, "JoAnne's love for me has been like an invisible cloak that has surrounded my life - a life in prison maybe - but vastly different particularly because of her presence."

JoAnne learned about other youth sentenced to life without the possibility of parole. She studied the brain development of juveniles and read reports from Human Rights Watch.  In 2004 she formed a coalition which has expanded into the Iowa Coalition 4 Juvenile Justice. Nine years later juveniles are off death row and being resentenced - this includes Christine, who now has a chance of parole.

Joanne travels to Washington DC to attend the National Juvenile Justice Network (NJJN) annual seminars. She connects by phone with NJJN and the Campaign for the Fair Sentencing of Youth - working to resolve the injustices and inhumane treatment of our children.

Christine went on to say, "Perhaps JoAnne's most important restorative justice project has been redemption...for she has been that example for us all in everything she does...and she has taught me that we can all make differences where we are."