It Started as a Dream

In 1987 several members of the Congregation of the Humility of Mary started monthly meetings to explore unmet needs in the Quad Cities. Meetings with people representing a broad scope of services kept mentioning affordable housing as a major unmet need. There was much activity in the housing industry in the late 1980s. The goal was to end homelessness in ten years. Many religious communities were moving from education and health care and getting involved with housing for the homeless.
October 7, 1989, there was a huge march in Washington D.C. to help draw attention to this very serious issue. We chartered a bus and filled it with college students, sisters and their associates. We boarded the bus Friday afternoon and arrived in Washington Saturday morning ready to meet the tens of thousands of marchers from around the country at the Washington monument. As we marched toward the Capitol we chanted, "What do we want? --HOUSING! When do we want it? --NOW!" At the end of the day after hearing many prominent speakers, we headed back to the bus and got back to Davenport at noon on Sunday -- and adventuresome 44 hour trip!
While we marched, a separate rally was organized to draw attention to the growing number of homeless children. At the end of their rally the children from around the country marched with their parents to the Capitol steps where they met with Speaker of the House Thomas Foley. They pulled 60 red wagons filled with 50,000 letters to members of Congress and President Bush.
We came back, energized more than ever, to get moving. The Sisters of Humility of Mary gave the "dream committee" authorization to start a  transitional housing program for homeless single parent families. A new corporation was created and the sisters loaned the new entity start-up funds which included money to purchase the first property. In September 1990 the program opened with its new executive director, Sandy Walters, and four young mothers and their four babies. From that point on the dream continued to grow.
When we talk about the numbers of people who are homeless a very common response is, "Why can't they just get a job?" The problem is much more complicated and "just get a job" is only one piece of resolving the problem. I truly believe that only until one works with and/or takes time to listen to the stories can one begin to see the complexity of the issue of homelessness. When someone  is dealing with one or more of the following: substance abuse, mental health issues, domestic violence, loss of job, divorce, little or no family support, lack of education, single parenting without support, and post traumatic stress disorder related to any of these issues, how can "just get a job" be the solution? 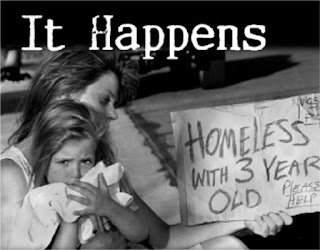 A person can be educated, have a place to live and have a job, but just one thing can happen and everything falls apart. For example, a car breaks down, there is no way to get to work; one loses the job, and soon there is no way to pay rent, and one loses housing. We hear many different versions of how life situations fall apart.
In designing a program, the "Dream Committee" wanted to effect change in people' lives. What could be done to help prevent them from returning to homelessness? As educators, we firmly believed that education and/or job training were essential components to a program. We also believed in a structured program. We did not intend to set ourselves up as judges; if a parent were to come to us asking for help we did not want to focus on the past and the "what ifs." We wanted to be able to provide the opportunities for them to work on goals that would lead them and their children to self-sufficiency and financial independence.
We also knew that, in order to make this work, we would need to provide those three basic needs: food, clothing and shelter. We started with the first four-plex and gradually, through donations of properties, grants and many volunteer hours of rehab, we grew to a total of 47 unite at 15 scattered sites and two units for site managers for some specialized populations. We developed a large donation area where families can get the clothing they need plus household items they might need to make their apartment their home. We also have a small food pantry for emergency use. When parents do not need to worry about where they will sleep or how to get their next meal, they can begin to work on their goals of education or job training.
The part of our program that is very special to me is that it is a program not only for the parents but for the children. When we can break the cycles of poverty and homelessness by making a difference in the lives of the next generation them we have been successful. When parents take advantage of the opportunities we provide it trickles down to the children. When family life gets organized with meal times, household chores, study time, bedtime rituals and holiday traditions, then family life takes on new meaning.
Former participants stop in or send email messages letting us know what they are doing and how grateful they are for having been a part of Humility of Mary Housing, Inc. Parents have gone on to become homeowners, to continue their education and to even go on for advanced degrees. Some of the children have been the first in their family to complete high school and go on to college. Some of our older children are now married and are homeowners.

The "Dream Committee" has been asked if they ever thought HMHI would turn out the way it has. How can we ever know what the future holds? All we can say is that HMHI has been built on lots of faith. We, Sisters of Humility, are involved in a future planning process and call it our journey into the future. As Humility of Mary Housing, Inc. completes 25 years and starts its journey into the future it takes off with a new executive director and, as of 8 years ago, has added a traveling companion, Humility of Mary Shelter, Inc. Even though these two agencies are separate corporations with separate missions and operating budgets, we do share an administrative staff. We certainly do not know what the future might have in store for us; however, we do know there are many homeless people, including single parents and their children, still needing our services. The next 25 years will be an all new story.