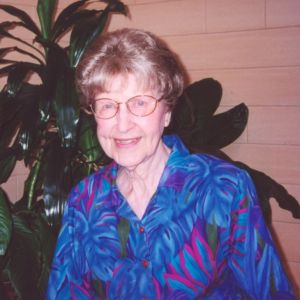 Welcome to Humility of Mary Center and to our prayer service honoring the life of Sister Marie Ven Horst. I never realized how difficult it would be to write about someone with whom I lived for several years and have known since I was a student at Marycrest College.  My early memories of Sister Helene were of freshman physical science class. She began the 8:00 a.m. class with a science experiment with flames or a loud noise just to make sure all were awake. Then she would declare, “Isn’t science wonderful!”  Tonight it is, “Wasn’t Marie wonderful!”

On February 8, 1916, Marie Elizabeth Ven Horst was born to John and Helena Venes Ven Horst, both immigrants from Holland. She is one of eight siblings. Her brothers John, Jim, Walter and Ralph, and her only sister Emma, whom we knew as Sister Mary St. John, CHM, are deceased. She is survived by her brothers, Herman and Harry, sisters-in-law, nieces, nephews, former students and colleagues, and her CHM sisters and associates.

At the age of five, agreeing not to be disruptive, Marie started school at the Forest Grove one-room school near Pleasant Valley. It averaged about thirty students each year. After finishing eight grades there, she attended Immaculate Conception Academy in Davenport, graduating in 1932. She graduated from Browns Business College in 1933. Marie immediately got a job as secretary at Republic Electric Company until she followed her sister and entered the Congregation of the Humility of Mary in September of 1938.  She received the habit and her name in religion, Sister Mary Helene, in July of 1939, and made first vows in 1941. Moving as only Sr. Helene could move, she graduated from Marycrest/St. Ambrose College in 1942 as science professors were desperately needed.  With great haste, Sr. M. Helene and Sister Benita (Bernadine) were sent to St. Louis University to get their Master degrees which she received in 1943. They were then sent to the University of Iowa to obtain their Ph.D. degrees. Instructors and classmates were shocked to see women, let alone nuns, in their science classes. Sister Helene broke the Ph.D. glass ceiling in the chemistry and physics departments with her degree in 1952. 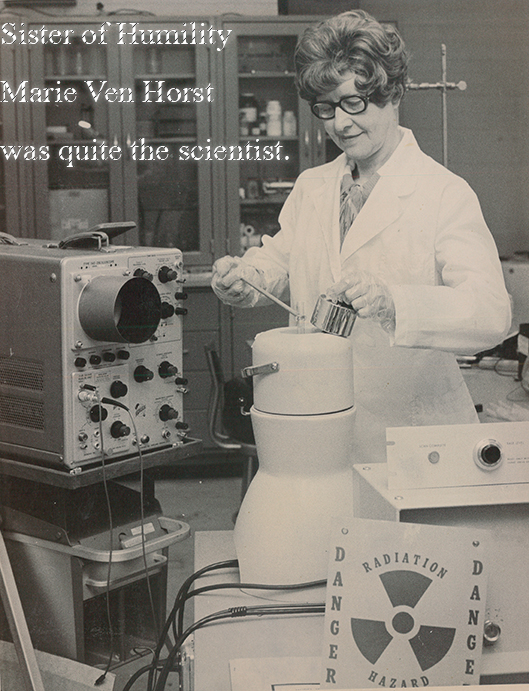 Sister returned to Marycrest where she endeared herself to hundreds of science students and, later, to weekend graduate students with her excellent teaching, sound advice, and sense of humor.

Sister Marie’s talents were numerous and diverse: fixing TVs, lamps and anything electric; baking bread; playing “Taps” at the Aloha ceremony; sewing and altering clothes; taking minutes at meetings; and typing dissertations. Not only could she do all of these things but her speed was amazing! If you took something to her to sew or mend, she returned it to your room or office by the time you got there. As an accomplished seamstress, she made most of her clothes.

For over thirty years Sisters Edith Kane, Elizabeth Ann Schneider, Joan Sheil and Marie lived together at different locations near the Marycrest campus.

After decades of teaching at Marycrest, she founded and directed the Weekend College. Her published scientific articles are too numerous to mention. For thirty-nine years she was author and publisher of the “Road Runner” containing all the CHM news that was fit to print. It was definitely the first- and most-read publication of the community.

After “retiring” and moving to Humility of Mary Center, Sister Marie began helping Sister Joann Kuebrich at Our Lady of the Prairie Retreat. She continued sewing, composing many postings for the bulletin boards, and doing other tasks around the Center. Her interest and curiosity about all things scientific never waned.

Sister Marie always seemed to “go with the flow” and “roll with the punches”. This certainly was evident one night when a loud crack woke her up. She heard glass falling. She got out of bed and, in her bare feet, started to the room next door only to discover that a deer had attempted to jump through her window. After the glass was swept up and a board was placed over the hole, Marie went back to her own bed.

Never really retiring and longevity are Ven Horst traits. Her brother, Johnny, helped her move into Humility of Mary Center when he was well into his nineties.

Heaven is in for a real ride with almost all of the Ven Horst siblings there now. Wasn’t Marie  wonderful?