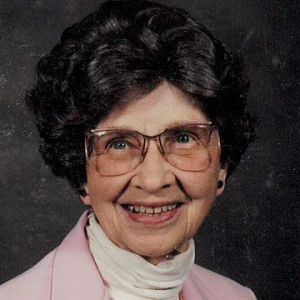 Sister Mary St. John was born in Davenport, Iowa, of parents who came from Holland and named her, their first-born, after the Queen Mother. The family later moved to Pleasant Valley, Iowa. At Our Lady of Lourdes in Bettendorf, Sr. Mary Gertrude McGowan became Sr. St. John's first violin teacher. After eight grade, Sr. Mary St. John helped her mother, then enrolled in Brown's Business College and worked as a secretary until she joined the Congregation of the Humility of Mary.

After profession in 1935, she continued her studies at Ottumwa Heights College and traveled to Chicago on weekends and summers where she furthered her academic and musical education. Her MA degree was from Holy Name College, Oakland, CA.

Sister St. John was a whirlwind of energy who brought together the first string ensemble at Ottumwa Heights College and continued teaching violin and conducting a string ensemble during her retirement. She also taught Sunday and vacation schools for over 30 years.

After her years of teaching at the college, Sister formally retired but continued teaching at her home for another nine years. Her gardening and baking abilities were enjoyed by the whole community.

St. John Auditorium at Indian Hills Community College in Ottumwa is named in her honor.

Sister Marie Ven Horst, CHM, was her sister, and she also had relatives in Holland who were members of religious communities.